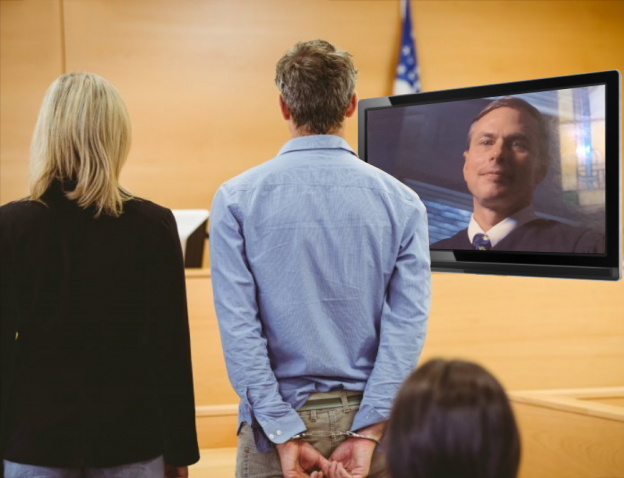 In the late 1990s, the State of West Virginia decided to replace its 55 local jails located as part of the courthouse complexes in the county seats, with 10 Regional Jails each serving 5-6 counties. This created a challenge for judges and lawyers to do their jobs when the defendants were at a distant location. The West Virginia Supreme Court asked Judge Dan O’Hanlon, head of the Judicial Technology Commission, to research and propose a videoconferencing solution.

Judge O’Hanlon found that other states transmitting video on Integrated Services Digital Networks (ISDN) were having video/voice sync problems and frequent dropping of calls. At that time the West Virginia Network for Educational Telecomputing (WVNET) had received a grant to become the first all-ATM (Asynchronous Transfer Mode) switched network in the country, and O’Hanlon knew that ATM was the perfect network to carry video conferencing. He teamed up with Allen Daugherty, telecommunications manager at WVNET, and they received a grant from the state to do a pilot project. Within a year, they connected three counties and two regional jails. Now an arrested person could appear before a judge from a room in a jail, saving money along with bringing faster due process for the individual.

“The system worked beautifully and I came to admire the incredible talent at WVNET!” says Judge O’Hanlon.

A few years and several grants later, WVNET connected every jail, prison, juvenile facility and courthouse in the state along with the state capitol building, creating the largest ATM-based public video conferencing system in the world! It saved the state millions of dollars in guard and transportation costs because prisoners did not have to be transported between jails and courthouses, and it eliminated the risk involved in doing that.

The “Courthouse of the Future” project gained national attention, winning the Governor’s Technology Award, getting recognition for demonstrated Internet business leadership in Cisco’s iQ Magazine, and being reported in Forbes magazine, Fortune magazine, and the Wall Street Journal.

WVNET later moved from ATM to an IP-based fiber optic network. Upgrades were made to the video network, including the addition of newer Cisco and Polycom equipment, to significantly improve security for calls both in and outside of West Virginia. WVNET handles the scheduling for all calls with out-of-state sites. They also work with the court technical staff to troubleshoot and replace faulty video equipment, and help to migrate from older to more modern systems.

Judge O’Hanlon adds, “Perhaps the greatest part of the story is that for 20 years WVNET has run the network with almost no glitches or problems. Hundreds of video calls go out across the network, continuing to save time and money. Many people from other states and countries visit WVNET to see how they manage to do that.”

WVNET’s video network continues to find new users, including corrections, federal judges and prisons, witnesses, law firms, language interpreters, the West Virginia Department of Health and Human Resources (DHHR), and healthcare agencies and hospitals. Combined with WVNET’s Distance Learning resources, the West Virginia Supreme Court uses the system for professional development and training. WVNET employees use it to meet with colleagues throughout the state. These are some of the many ways that WVNET provides essential cost-effective services to the state of West Virginia.