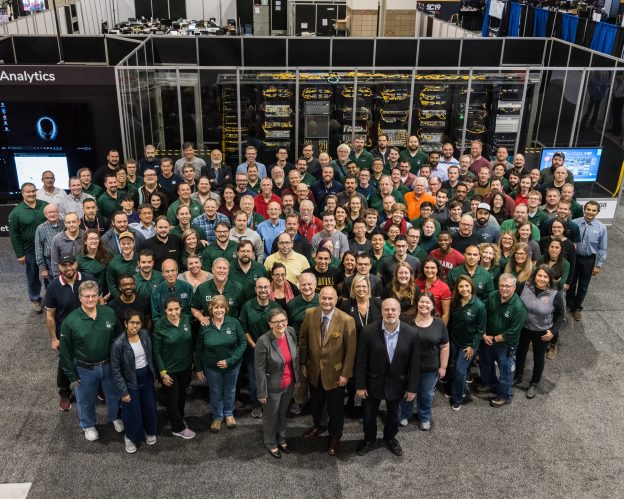 The Utah Education and Telehealth Network (UETN) provided a leadership role in planning, building and operating SCinet – the lightning fast network at the heart of SC19, the International Conference for High-Speed Computing, Networking, Storage and Analysis, held in Denver last year.

Jim Stewart, UETN CTO, chaired the SCinet team. It took them more than a year to plan and a month to build, but just a week to operate, and 24 hours to dismantle. Under Stewart’s direction, 33 organizations contributed $80-million in hardware, software and services to build the network. That’s up from $52 million contributed at SC18 in Atlanta the year prior.

UETN was among 88 organizations that sent employees to volunteer in planning, building and operating the network.

“It’s a one-of-a-kind opportunity to work with this international team in a multi-vendor environment and thus provides unparalleled professional development,” said Stewart. “We are able to integrate different technologies. We learn and share technical skills. We learn and practice organizational, management and communication skills. We develop important interpersonal skills.”

Participants also learn how to face the pressure of building real-world infrastructure that has to work on a global scale. “This is a project with a final exam,” exclaimed Stewart. “The exam starts on the opening night of the conference. International participants start using the network to showcase their research. Cutting-edge experiments are deployed. VIP tours are conducted. It is a fishbowl! If you stumble, you stumble on an international stage, but if you succeed, you succeed on an international stage.”

By all accounts Stewart and his team succeeded. SCinet delivered a stunning 4.22 terabits per second of wide-area network bandwidth, enough speed to download the entire iTunes music library in less than 10 minutes. It deployed the first-ever 400 Gbps connection between Denver and Chicago.

“What we do always comes back to making the UETN network better,” added Stewart. “It’s all of these configurations; it’s all of these details that we’re learning, that we’re working out how to make a network perform better and be more reliable.”

Stewart sees that outcome when he visits schools in the isolated communities of Utah, where broadband is a necessity for education and healthcare. The network is nearing completion of fiber paths to remote San Juan and Daggett Counties, which have had to rely on much slower digital microwaves.

Ray Timothy, UETN CEO, attended the Denver event and hopes future SC conferences will again be held in Salt Lake City. He said SC12 and SC16 provided immediate and long-term benefits to Utah. “Visitors want to come back and bring their families, which in turn contributes to our economy. Some attendees return as valued members of Utah’s workforce.”

UETN also benefits in recruiting and in reputation. “Because we are part of SC, we’re acknowledged as an industry leader in high-performance networking,” adds Timothy. “Our ongoing involvement shines the spotlight on UETN and the University of Utah, where we’re based, and on the state at large.”