The turn of the 20th century bore witness to the transformative power of the Internet. We are now at a 21st century inflection point, heralding (pun intended!) accelerated transformation with quantum technologies. Frontier advances can be realized with the potential of transporting quantum information (qubits) and classical information (bits) together on the same network by leveraging the massive global internet infrastructure – essentially entangling (pun intended!) classical Internet properties with the mysterious properties of quantum physics to create exponential capabilities of the next generation internet.

The research goal of this effort is to enable trapped ion quantum computers to communicate over the internet. These are scalable quantum computing platforms with a built-in optical interface that makes them a reasonable choice for building repeaters and routers. The proposed quantum communications will be achieved by prototyping four deliverables: developing a high efficiency qubit interface, which will frequency-convert 493 nm photons from the trapped ion quantum computer to 1550 nm telecom frequencies and preserve the photon’s quantum coherence; designing a chip scale Quantum Reconfigurable Optical Add-Drop Multiplexer (QROADM); defining and implementing protocol standards for a full-scale quantum internet; and building the Mid-Atlantic Region Quantum Internet (MARQI), which will serve as the start-up testbed for trialing these technologies with the intent to scale in kilometer size as the investigated technologies mature. Future plans include commercializing quantum technologies.

The team consists of experts from the fields of quantum computing, classical network architecture and design, photonics, and quantum communication. Additionally, it includes partners from the commercial private sector, startup companies, research labs, and DoD labs.  A MARQI Advisory Committee brings together technology pioneers and industry thought leaders to guide and inspire the direction of the project to achieve convergence towards a fully functioning quantum internet.

Quantum networking has the potential to be incredibly transformational for many industries, including computing, telecommunications, cybersecurity, science, medicine and others.

UMD PI, Edo Waks said, “this research will significantly enhance our understanding of fundamental physics to be able to apply the findings to accelerate quantum communications and a future quantum internet. “In particular,” he added, “the security and anonymity of communications could be guaranteed by the laws of physics, with great impact for the fields of cybersecurity and secure communications.”

“In realizing these technologies, the capabilities of the internet as we know it today are exponentially enhanced,” said co-PI Tripti Sinha.

The MARQI network has the potential to provide technological innovation that will be useful for the research and education communities. MAX has an extensive regional footprint which provides ideal opportunities to expand the MARQI network to span a greater footprint in the Washington D.C., Northern Virginia and Baltimore region. In time, the research community will have the ability to directly access the computational and innovative capabilities of the MARQI network.

In the figure above: (a) Is a schematic of a quantum network interconnecting multiple quantum computers; (b) Is an illustration of a computing node composed of a trapped ion quantum computer that has both memory ions and optical ions. Optical ions emit photons that are shifted to telecom wavelengths and injected into the MARQI fiber network (c)

FIGURE 2. The QROADM performs a photonic Bell measurement on any pair of input channels. 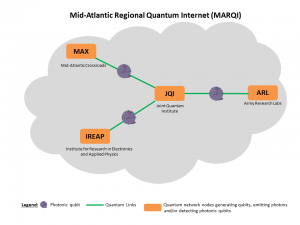