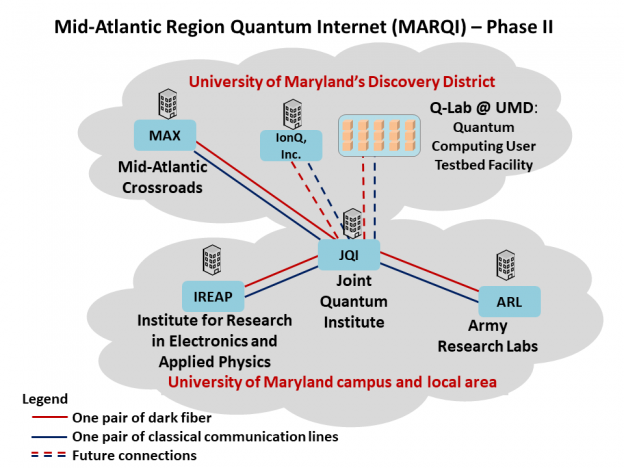 The goal of QuaNeCQT is to develop technologies and hardware that enable quantum computers to communicate over the Internet. This project is a continuation of the work completed by the same multi-institutional team in 2020 (NSF Award #2040695).

Two deliverables will be produced by the QuaNeCQT team during this two-year project.

This project will bring the quantum community a step closer towards a fully functional quantum Internet – a valuable resource for research and education communities. MAX built the nascent quantum network footprint in phase I and continues to build the network testbed to add additional nodes and trial these emerging technologies. The MAX network footprint will be leveraged to provide significant opportunities for future expansion of the MARQI network footprint in Washington, D.C., Northern Virginia, and Baltimore region.

Mid-Atlantic Crossroads (MAX) is a center at the University of Maryland that operates a multi-state advanced cyberinfrastructure platform. MAX’s all-optical, Layer 1 core network is the foundation for a high-performance infrastructure providing state-of-the-art 100-Gbps network technology and services. MAX participants include universities, federal research labs, and other research-focused organizations in the Washington and Baltimore metropolitan areas. MAX serves as a connector and traffic aggregator to the Internet2 national backbone and peers with other major networks. Its mission is to provide cutting-edge network connectivity for its participants, tailored and generic data-transport solutions, and advanced services to accommodate and optimize large data flows and to facilitate network and application research.