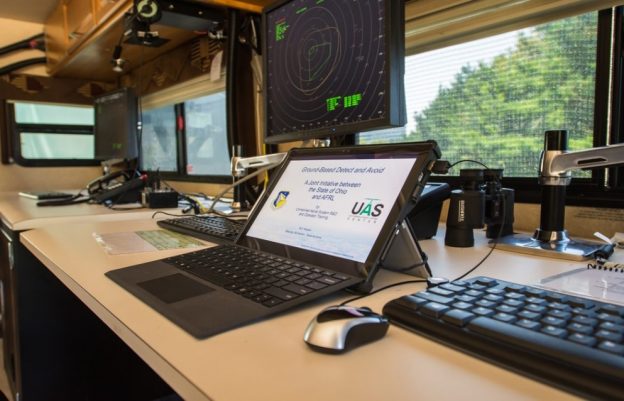 For more than 30 years, OARnet has provided statewide connectivity for a wide variety of innovative projects across Ohio. These projects include a booming esports industry, a growing number of next-generation 911 systems, an ever-widening network of telehealth services, K-12 distance learning and online testing efforts, and a national presidential debate held on a small college campus.

“Since its inception, OARnet has been at the center of hundreds of complex partnerships where disparate communities accomplish amazing things together,” said Denis Walsh, interim executive director of OARnet. “The Ohio UAS Center project is a wonderful example of the power of such collaboration.”

The OARnet connection supports SkyVision, which enables drones to be flown in the beyond-visual-line-of-sight (BVLOS) mode. Developed as a cooperative effort between the U.S. Air Force Research Lab and the State of Ohio, the system monitors radar data from several locations via OARnet, allowing experimental drones to see and avoid other aircraft while they are in flight.

“New technology connectivity is a crucial piece to deploy unmanned aircraft across the state, and OARnet facilitates that vision,” said Richard C. Fox, airspace manager at the Ohio UAS Center. “Bandwidth is a crucial driver in the continued growth of autonomous vehicles -both in the air and on the ground – and Ohio had the vision to develop a network that supports current and future advancements.”

The OARnet connection links the center at the Springfield-Beckley Municipal Airport to Ohio UAS offices at a tactical training site, as well as to FAA radar feeds from airports in Dayton and Columbus and long-range radar in London, Ohio. Network links were added between the center and nearby Wright-Patterson Air Force Base and the NASA Glenn Research Center in Cleveland, another test site for drone technologies.

The work of the UAS Center, carried out through the Ohio Department of Transportation’s DriveOhio initiative, gives Ohio a major advantage in economic development as drones become the basis for new industries such as precision agriculture, infrastructure inspection, environmental survey and first-responder support.