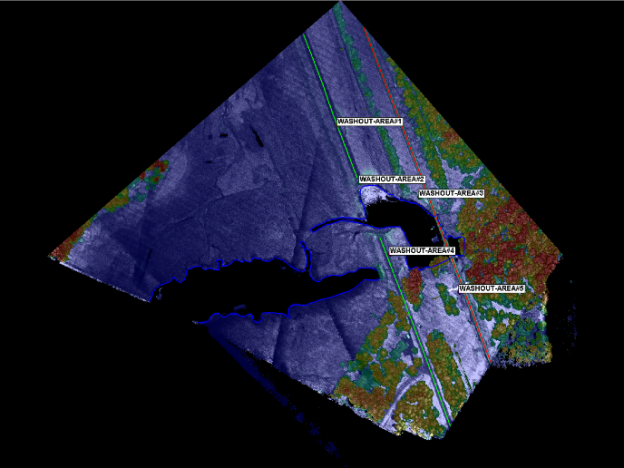 The 2018 hurricane season was the most active on record. It was particularly unforgiving for many coastal communities – especially in the Carolinas. In September 2018, Hurricane Florence impacted much of North Carolina. As forecasted, the storm made landfall on Sept. 13 just south of Wilmington, with high winds and record amounts of rain. Throughout the historic weather event MCNC was ready.

MCNC operational teams worked in coordination with senior management and constituents to gain a clear understanding of which locations planned to turn off equipment in advance of the storm. Additionally, fiber and facilities teams conducted site inspections to make sure those facilities in the path of Florence were properly prepped. During the peak of the storm, there were 148 outages reported for NCREN endpoints. As with Hurricane Matthew two years prior, all MCNC hut locations east of I-95 at one point in time were operating via on-site emergency power generators due to facility power being unavailable. Generators ran for extended periods at MCNC’s hut in Wilmington, as well as in Fayetteville, New Bern, Morehead City, Pembroke, Whiteville, and Bolivia. The NCREN core optical and IP infrastructure did not experience an outage.

The MCNC Business Continuity/Disaster Recovery (BCDR) Team also was activated to alert constituents to the current status of NCREN as the storm worked its way out of the state and operations returned to normal. MCNC was effective in providing real-time network advisories on their website and on social media.

Everette Teal, director of technology for Public Schools of Robeson County, N.C., said he didn’t think lightning could strike twice with two major storms in a two-year period – both of which destroyed central technology operations for the school district, forcing them to move their core data structure to a new, non-flood zone in order to get their system back online.

“MCNC came through immediately with a plan of action to move and restore Internet to our district in a very timely manner,” added Teal. “Our service was back in operation in less than three business days with minimal loss of information and in full operation throughout the district. We would like to give all the credit to the MCNC team for bringing some type of normalcy back to our staff and students.”

The Federal Emergency Management Agency (FEMA) called upon MIT Lincoln Laboratory to use their state-of-the-art lidar (light detection and ranging) system to image the destruction in the region. And, MCNC was ready to help. MCNC provisioned a 10-gigabit IP connection from NCREN to Internet2 and made it possible for FEMA to process and share terabytes of satellite data faster than ever before during a recovery effort.

Even though at impact Hurricane Florence had been reduced to a Category 1 storm, Florence produced record-breaking rainfall, with more than 30 inches measured in some locations. At least 53 deaths were attributed to the storm and property damage and economic loss estimates have reached almost $24 billion, which is higher than the costs from 2016’s Hurricane Matthew and Hurricane Floyd in 1999 combined. Hurricane Florence remains a weather event that many in North Carolina will not forget for years to come. MCNC continues to fine-tune its process and procedures during emergencies and weather-related events, and will once again be ready to deliver, not if something happens again – but when.