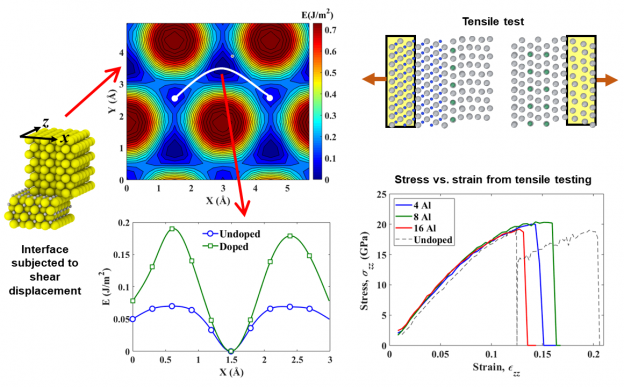 A few decades ago, it was common for automobile transmissions to wear out despite having an engine in relatively good condition. Engineers soon discovered that the life of machine components operating at high temperature, pressure, and speed can be significantly extended by adding a thin layer of ceramic, provided the interface between the metal and the ceramic was strong and durable. Although this discovery has allowed automobile manufacturers to offer powertrain warranties of up to 10 years or 100,000 miles, the principles involved in choosing the materials for an appropriate interface are unclear. The current approach in material selection consists of trial and error in the laboratory – an endeavor which is expensive, time-consuming, and prone to accidents.

A solution is currently being developed by a team of Louisiana Tech University-based researchers through the Consortium for Innovations in Manufacturing and Materials (CIMM) in Louisiana and funded by the National Science Foundation. This team is led by Professor Collin Wick and has developed a computational simulation protocol that helps predict metal/ceramic interface properties based on large-scale computations on the QB2 supercomputer of the Louisiana Optical Network Infrastructure (LONI).

The computationally demanding part of the research is based on a framework known as density functional theory (DFT). These computations enable researchers to gain atomic scale insights into the metal/ceramic interfaces. Using this approach, the team that includes doctoral students Abu Shama Mohammad Miraz and Nisha Dhariwal, undergraduate student Eboni Williams, and faculty collaborator Professor Ramu Ramachandran, predicted that adding aluminum to the interface between titanium and titanium nitride will significantly increase its wear resistance whereas some other doping agents will have no effect or a negative one.

Predictions of interfacial properties were also made for copper/titanium nitride interfaces doped with zinc and nickel. These results have allowed the researchers to increase awareness of factors that determine interfacial strength in these cases. Equally important is that these results were obtained in a matter of several wall-clock hours of computations running on several compute nodes of QB2. Preparing the corresponding metal/ceramic systems in the lab and testing their properties would have taken many months of painstaking effort, but without the atomic scale insights provided by computations.

The computational demands of DFT are so high that only systems of a few hundred atoms can be studied. Simulations make it possible to understand the effect of phenomena that only emerge at larger scales, such as crystal domain boundaries, defects, and misfit dislocation networks, on interfacial properties.

The team is now collaborating with experimentalists to validate their results and models against sophisticated measurements made possible by the research infrastructure investments through the CIMM project. Once the computational models are refined and validated against experiments, the protocol can be used to rapidly screen additives to coatings that optimize wear resistance and to rule out the less effective ones, thus saving significant time and money for the manufacturing industry.