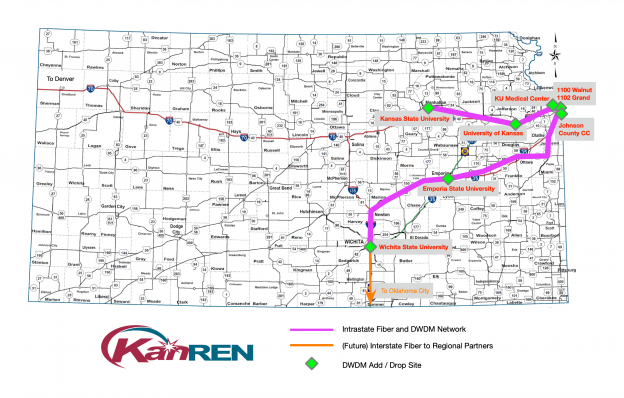 For 28 years, the Kansas Research and Education Network (KanREN) has worked with community anchor institutions to connect, collaborate, and share resources to realize the full potential of a robust statewide network. KanREN’s core membership is anchored by public universities in Kansas that operate as a consortium working collaboratively to function as their own ISP.

KanREN is “connecting beyond the connection” in multi-faceted ways. The network provides powerful connectivity to research and education resources not available through commercial providers. KanREN’s backbone is a set of overlapping rings which includes a 100 Gbps ring connecting the research universities and a 10 Gbps ring interconnecting other public universities.

The first phase of a new multi-year plan is to create a fiber ring backbone connecting all the state’s public universities. Today there is a single lit 100 Gbps wave between downtown Kansas City and Wichita State University (WSU). The dark fiber KanREN recently acquired through a 20-year agreement with Zayo, will run from downtown Kansas City, through to Johnson County Community College (JCCC), Emporia State University (ESU) and on to WSU. That new 240-mile route is hitting two core institutions along the way, and strategically puts JCCC, the largest undergraduate institution in the state, on its backbone. WSU is considered a strategic location because it also serves as an exit point from the state. It is about 20 miles from the Oklahoma border, where KanREN is working on the next phase: an interconnect with OneNet. Once completed, KanREN and OneNet will provide a shared connection to Great Plains Network (GPN), a regional consortium of state networks with POPs in Kansas City and Tulsa – providing all GPN participants diverse access to Internet2 in both locations.

The plan is to start bringing the fiber online late this summer into early fall. In the long term, engineers are looking to wrap dark fiber around the backside from KSU to WSU, completing a dark fiber ring around all the state’s research universities, and to then obtain dark fiber to the other public universities.

KanREN board chair, and JCCC executive director of Business Continuity Management, Sandra K. Warner, said, “The investment this year serves as a centerpiece for KanREN’s financial, technology infrastructure, membership, and mission continuity strategy.” She added, “Kudos to the KanREN staff and board of directors for their fortitude and commitment to ensure the Kansas Research and Education Network will not only survive, but thrive in the future.”

KanREN’s multi-year network expansion in collaboration with OneNet and GPN to directly interconnect states in the region will have a long-term stabilizing effect. “It’s not only about capacity. Sure, having essentially unlimited bandwidth is great, but our operating paradigm is very much a consortium,” confirmed KanREN executive director, Cort Buffington. “This expansion will contribute to the long-term financial and technical stability of KanREN members, and contribute to economic and workforce development in our state; so in that sense, it’s about so much more than just bandwidth.”