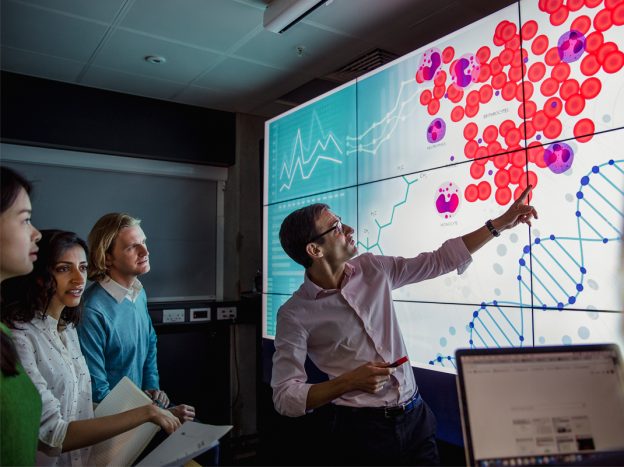 Indiana GigaPOP network engineers collaborated with Ciena, Internet2, and ESnet to power the fastest network ever built for research and education. The new 400-gigabits-per-second ‘Monon400’ debuted in November 2018 at the International Conference for High Performance Computing, Networking, Storage, and Analysis (SC18) in Dallas, Texas.

Called the Monon400 because it operates over 400G channels, the 800-gigabits-per-second capacity high-speed network can transfer a 4K-resolution movie in about one second. The network can be upgraded to a maximum capacity of 25.6 terabits-per-second, or roughly 32 times its current speed.

For the SC18 Network Research Exhibition (NRE) demo, the Monon400 ran over a dedicated 100G circuit provided by the U.S. Department of Energy Science Network (ESnet) and three shared 100G circuits, two from Internet2 and one from CenturyLink, to complete the 400G capacity.

“The SC18 demonstration is just the first example of what the Monon400 will enable through the high-speed, low-latency network connectivity we have built in Indiana,” said Marianne Chitwood, director of I-Light, Indiana’s statewide higher education optical fiber network, and the Indiana GigaPOP. “Researchers will be able to do high-performance data transfers at much higher speeds than before—all because Monon400 has been built with the research community and its requirements in mind.”

For the Monon400, Indiana GigaPOP worked with Ciena to deploy the company’s Waveserver® Ai 400G stackable interconnect platform and Blue Planet® Manage, Control and Plan (MCP) domain controller with Liquid Spectrum™ analytics applications. It is the first research network deployment of Blue Planet MCP and Waveserver® Ai. The resulting programmable infrastructure will enable the use of 400G channels connecting Indianapolis to Chicago with full visibility into network efficiencies.

High performing networks that have the ability to scale are imperative in the research and education networking community. The current platform and software enable Indiana University to deliver high-capacity 400G wavelengths and greater flexibility in the network to facilitate more efficient collaboration between scientists and easier access to data intensive resources.