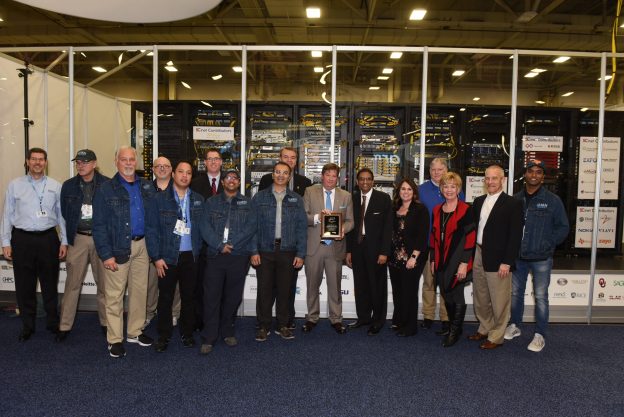 Supercomputing 2018 (SC18), the international conference for high performance computing, networking, storage, and analysis, was held in Dallas, Texas, in November 2018. The event also results in the high-intensity installation of a dedicated high-capacity network infrastructure: SCinet. Designed and built by volunteer experts from industry, academia, and government, SCinet, for the duration of the conference, is the fastest and most powerful network in the world. As the local leaders of the SCinet effort, LEARN’s staff had a critical role to play.

Pankaj Shah, president and CEO of LEARN said, “LEARN dedicated its entire team to assist in architecture and building of SC18 infrastructure. This is a year-long effort. SC is one of the most fertile grounds for engineers to experience state-of-the-art, bleeding edge technologies, while making life-time peer relationships from across the world.”

“My team has been participating for several years,” Akbar Kara, LEARN’s CTO said. “You end up working with peers who bring a fresh perspective. That’s part of growing as a professional and you become on a first name basis with really smart engineers in the academic and vendor community. When companies send eight to ten million dollars’ worth of hardware, they also send smart people to make sure stuff works. The insights you learn and the relationships you develop are invaluable.”

But none of this would have mattered if the LEARN team hadn’t first found a way to get high-speed access to the convention center in the first place. LEARN was fortunate that one of the major aggregation points of the network on many backbones happens to be less than one mile away from the convention center. This is where Internet2, ESnet, LEARN and Century Link —research and education networks as well as carriers —terminate their capability, their networks and their fibers.

But making the connection from the aggregation point to the convention center meant identifying a path through the bowels of City Hall to allow them to install the fiber. The fiber is the nervous system for the show. Every booth requires some level of connectivity to support the demonstrations and some of these demonstrations required up to 1.6 Tb or 1,600 gigabits-per-second of bandwidth that was plumbed between the network operations center to the booth to support science.

“We couldn’t have done it without LEARN,” Jason Zurawski, the 2018 SCinet chair said. “They were able to move mountains on their end to make sure their local infrastructure was capable of meeting SCinet’s needs.”

This effort netted the collaborators, LEARN, Ciena, Energy Sciences Network (ESnet), Internet2, and Utah Education and Telehealth Network (UETN), the inaugural “Spirit of Innovation Award” from the conference for embracing “the spirit of collaboration and cooperation that showcases the best there is to offer in demonstrating, implementing, and operating leading-edge solutions to challenging problems,” according to Zurawski.