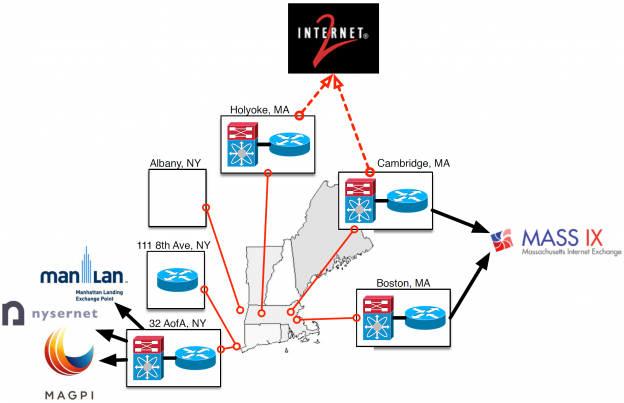 The Northern Crossroads (NoX), with an expanded footprint, faster backbone, and top-rated security, has kept pace with the growing needs of research and education in the Northeast.

The NoX has grown beyond its original colocation facilities in Boston and Cambridge with the establishment of strategic peering points in four additional sites, including the Massachusetts Green High Performance Computing Center (MGHPCC) in Holyoke, two sites in New York City, and one in Albany.

With this expansion into New York, the NoX is establishing direct peering with Apple, Google, Akamai, Netflix, and Facebook. Links to Connecticut Education Network (CEN), the Mid-Atlantic GigaPOP in Philadelphia for Internet2 (MAGPI), New York State Education and Research Network (NYSERNET), and the Ocean State Higher Education Economic Development and Administrative Network (OSHEAN) put the foundations in place to provide seamless access to the Eastern Region Network (ERN) and other regional and national research initiatives. And with an upgraded backbone, the network can provide support for 100GE connectivity.

Beyond strategic peering and connectivity, the NoX also offers its entire community Akamai’s highly valued Prolexic DDoS protection service. Attacks of up to several hundred Gb/s are mitigated and scrubbed, allowing clients to focus on their work undisrupted.

NoX also supports a myriad of research activities across its New England membership. Examples include the Mass Open Cloud (MOC), the Northeast Storage Exchange (NESE), and the ATLAS experiment.

NESE is a shared regional storage collaboration funded by the National Science Foundation and operated as a long-term partnership between the five flagship universities at the MGHPCC and RedHat. NESE’s main goals are to meet the storage needs of the data revolution for science, engineering, education and technology, particularly for researchers in the northeastern part of the U.S.

The ATLAS experiment is a large detector system developed by physicists from around the world; the system tracks very-high-energy proton-proton interactions at the Large Hadron Collider (LHC) at the European Organization for Nuclear Research (CERN) laboratory for high-energy physics near Geneva, Switzerland. This experiment will probe the origins of electroweak symmetry breaking and the particles associated with the new physics (such as the hypothetical Higgs Boson). A 100GE pipe to the MGHPCC feeds the Tier-2 ATLAS cluster operated by Boston University and Harvard University. NoX has established an Advanced Layer 2 Service connection across its framework to the LHC Open Network Environment (LHCone) at New York, supporting the large-scale data transfers to the cluster.