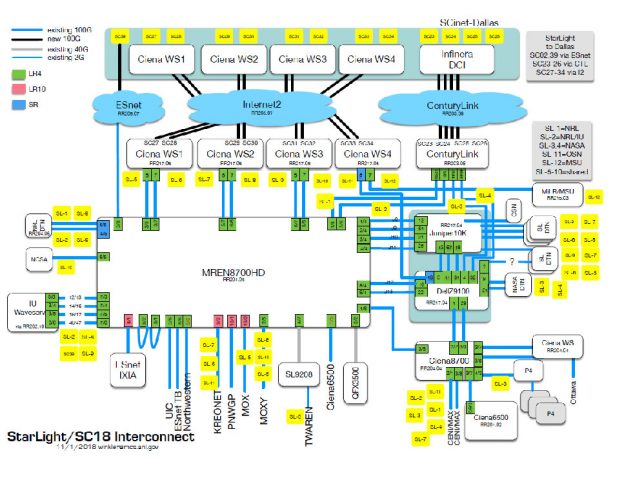 The Metropolitan Research and Education Network (MREN) was established specifically to meet the requirements of data-intensive science. The key data movement challenges of data-intensive science that are being addressed by MREN are two-fold. The first is the need to support large scale capacity. This means not only addressing increasing numbers of 100 Gbps paths, but also preparing for the capacity to support 400 Gbps and Tbps paths using bonded lightpaths provisioned over superchannels. The second is the need for network programmability such as the use of software-defined networking (SDN) to optimize that large scale capacity. Recently, network programming using SDN has become more sophisticated, and it now includes techniques for integration with network programming languages, such as P4.

To showcase these innovative services and technologies, MREN collaborates with its community partners to stage demonstrations at major international and national technology workshops, conferences, and special forums. One major venue for these demonstrations is the SC supercomputing conference. In 2018, the 30th annual ACM international Supercomputing Conference for High-Performing Computing, Networking, Storage, and Analysis International Conference (SC18) took place in Dallas, Texas. For this conference, MREN, the SCinet Wide Area Network (WAN) team, the StarLight consortium, and multiple national and international research partners, designed and successfully implemented several demonstrations. These included creating a 13*100 Gbps network path from the StarLight Facility to the conference venue in Dallas, creating a 6*100 Gbps path from Washington, D.C., to the venue and also creating 2*100 Gbps from Washington, D.C., to the StarLight Facility.

The SCinet WAN was used to stage 35 sets of national and international 100 Gbps demonstrations of emerging advanced networking services, architecture and technology. Demonstrations included a showcase of the capabilities for supporting Petascale science with the StarLight International Software-Defined Exchange (SDX) and for programmable WAN networking with the NSF Global Environment for Network Innovations SDX. Also supported were demonstrations of advanced services for the High Energy Physics research communities, with a focus on the Large Hadron Collider Open Network Environment. Another MREN supported project showcased a prototype service for the Large Synoptic Survey Telescope which is being developed on a mountain in Chile. When operational, this telescope will send hundreds of gigabits of space exploration data from Chile to Sao Paulo, Brazil, to Miami, Florida, to the StarLight Facility to the National Center for Supercomputing Applications at the University of Illinois Urbana Champaign, where the data will be shaped into science products and then distributed to research science communities world-wide. In addition, MREN supported multiple Data-Trans Node (DTN) demonstrations, including international DTN meshes and a partnership with SCinet that implemented a DTN-as-a-Service prototype.