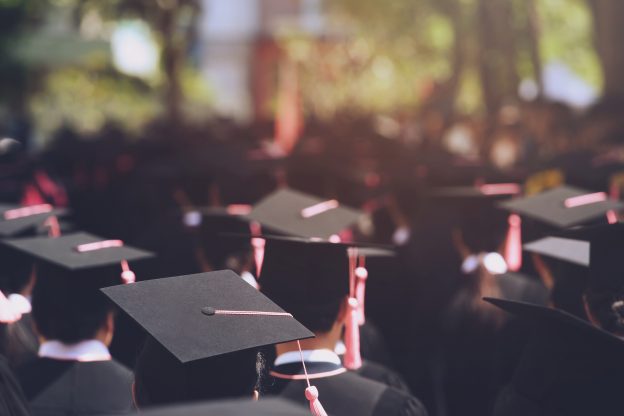 For most parents, their child’s high school graduation is an event not to be missed. Some, however, cannot be there due to circumstances beyond their control. Donna Ortiz is one of those parents. She is a Command Sergeant Major in the U.S. Army Reserves and is currently stationed overseas. Ms. Ortiz knew she would not be home to see her daughter Alejandra graduate, so she reached out to Pilgrim High School and asked if there were any options to stream it online.

Warwick School District IT Director, Doug Alexander, was aware of OSHEAN’s video platform, Video Commons 2.0. Video Commons would provide the online streaming service Ortiz needed. “It was a relatively simple process and I knew this was the solution we were looking for,” said Alexander. The groundwork was now laid.

As the date for the ceremony got closer, Alexander reached out to OSHEAN, CCRI (the event venue), and Studio 107 – the district’s audio/visual studio out of Pilgrim High School – to put the project together. It was a collaborative effort – OSHEAN supplied the server, Studio 107 provided the camera, and CCRI supplied the sound and technical support. Set up and testing went without a hitch.

Toll Gate High School hosted their own graduation the night before Pilgrim High School. This provided a great opportunity to test Video Commons 2.0 live. The video experience was executed as expected and the district achieved its highest number of viewers ever for a streamed event! When the Pilgrim Graduation was held the following night, halfway across the globe Ms. Ortiz, was able to watch her daughter, in real-time, graduate high school. The Ortiz family and the Warwick School District were extremely pleased.

All in all, the event was a huge success. So much so that the story was picked up by local media. After the ceremony, OSHEAN set up a Warwick School District page where links to both graduation streams can be accessed. With the success of these two events, the district is now looking to use the Video Commons service platform for other events such as assemblies, concerts and meetings allowing students to work and manage the equipment and technology. A video streaming and capture plan has the potential to be incorporated into the curriculum pending budgetary and management logistics.

There are times when technology operates in the background and can even be taken for granted. There are other times, however, when the application of technology is felt. Bringing presence to a military family for an event like a daughter’s graduation is one of those wonderful, meaningful examples.