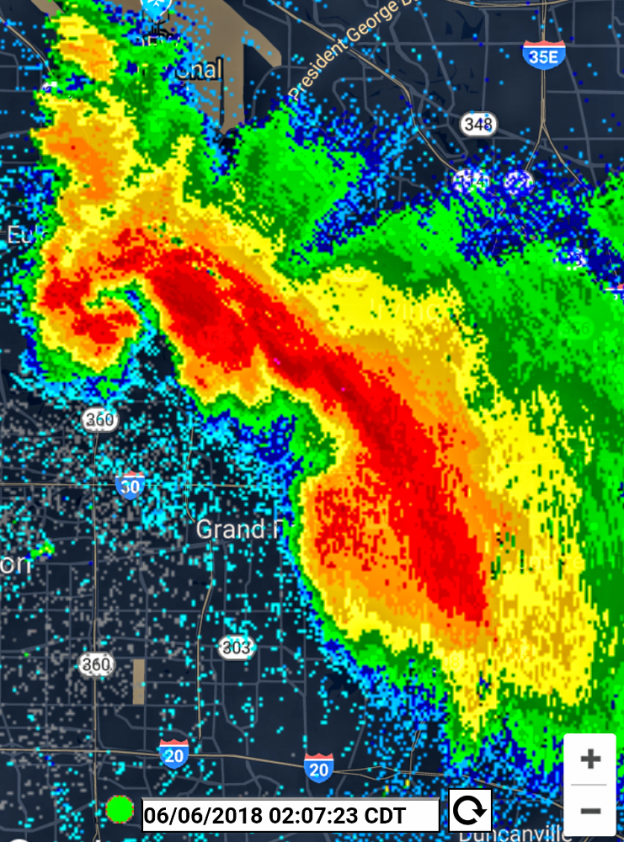 Collaborative Adaptive Sensing of the Atmosphere (CASA) is a University of Massachusetts Amherst Engineering Research Center featuring a network of Doppler radars that offers early detection of impactful weather. CASA radars originally were deployed in southwestern Oklahoma, where extreme weather such as tornadoes occur often. When the 10-year grant was completed, the CASA radar system was moved to the Dallas-Fort Worth (DWF) area where it could be used in a heavily populated area to increase its impact. The data from these sensors requires large amounts of bandwidth, provided in part by connectivity through LEARN.

Data generated from CASA radars is used nationally for research and modeling, including operationally by the NWS Fort Worth/Dallas forecast office and the National Oceanic and Atmospheric Administration (NOAA).

“There were issues getting data from all those sensors into a working environment and making it available, explains Douglas Rhue, Regional Networking and Program Manager for the National Weather Service’s (NWS) Southern Region Headquarters (SRH). “SRH has a partnership with LEARN and has been on the board for as long as I can remember. Since we are members of (and connected to) LEARN, we were able to get LEARN access for the CASA radars.”

There are seven CASA radars deployed around the DFW area, including two on the LEARN network at the University of Texas at Arlington (UTA) and at the University of North Texas (UNT), where it is ported across the friction-free LEARN backbone to academic compute clouds at the University of Houston (UH) and at Texas A&M University. In addition, LEARN has enabled access to Internet2’s advanced Layer 2 services, which allows CASA to dynamically provision computing resources and bandwidth prioritized to meet the user needs as weather changes.

A phone app allows for community members in the DFW area to receive warnings on their phone of potential bad weather in their area.  Eric Lyons, lead systems engineer and lead of Radar at UMass, explains that a member of a community that is subscribed can customize current locations and get targeted app updates and warnings; they can even choose when to get alerted, such as rainfall over a certain amount or a tornado within a certain radius of their home or office.

“The data from this app is used by social scientist researchers in a variety of ways. They do surveys, test verbiage and see people’s reactions,” adds Lyons. “If they received a flood warning, did they avoid the

flooded area? Did it affect traffic? Having LEARN at UNT and UTA is tremendously helpful. LEARN gives a number of options for data processing compared to most sites, where the last mile connection is usually a bottleneck. With LEARN we can do so much more with the high-speed connectivity.”

Bandwidth to the SRH increased 10 times in summer 2020. While each radar sensor has a dedicated connection, they all converge on the LEARN network. Closes Rhue, “without connectivity from LEARN, I don’t think we’d have nearly the success we’ve had with the CASA radar system.”