The Arkansas Research and Education Optical Network (ARE-ON) and its members comprise a community of thought leaders focused on collaborative learning and innovation through advanced networking, technology, and research in Arkansas. ARE-ON is a not-for-profit consortium of all public degree-granting institutions in Arkansas and other selected higher education organizations connecting all four-year universities, almost all two-year colleges, and more than 400 health care institutions to a robust and resilient broadband backbone.

Since 2007, ARE-ON’s affiliation with the University of Arkansas has enabled the organization to provide a high-speed fiber-optic backbone network throughout the state with 1G and 10G Ethernet connections to its members, affiliates, national research and education networks, regional optical networks, and commercial service providers. The network consists of approximately 2,200 miles of long-haul fiber and about 85 miles of metro fiber in 24 cities and four neighboring states. ARE-ON’s extensive reach allows institutions to connect, collaborate, and innovate within the organization’s core agendas of education, telemedicine, research, and emergency preparedness.

ARE-ON was a subrecipient of one of the largest BTOP grant winners in the nation; it received $41 million to expand its fiber backbone to connect two-year colleges, and the University of Arkansas for Medical Sciences received $61 million to connect health care institutions for telemedicine, videoconferencing, and other health care consultations through the ARE-ON network backbone. Although ARE-ON does not provide service to any public schools in the state, a small but mighty team of six employees operates this vast broadband infrastructure for the betterment of mission-critical endeavors by community institutions across the state. 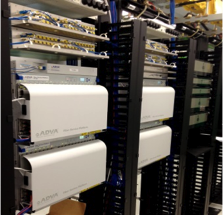 The SURA Optical Networking Cookbook was published in December 2001 listing Arkansas as an emerging state-based regional optical network. In December 2005, the University of Arkansas was presented with $6.4 million to begin construction of this network. A little more than a year later, ARE-ON received $9.4 million to connect all remaining four-year universities to the network. The University of Arkansas then transitioned to ARE-ON for commodity Internet service in November 2007. The first phase of the network was completed in June 2010 with BTOP funding awarded in August of that year to UAMS and ARE-ON for the Arkansas e-Link Project.